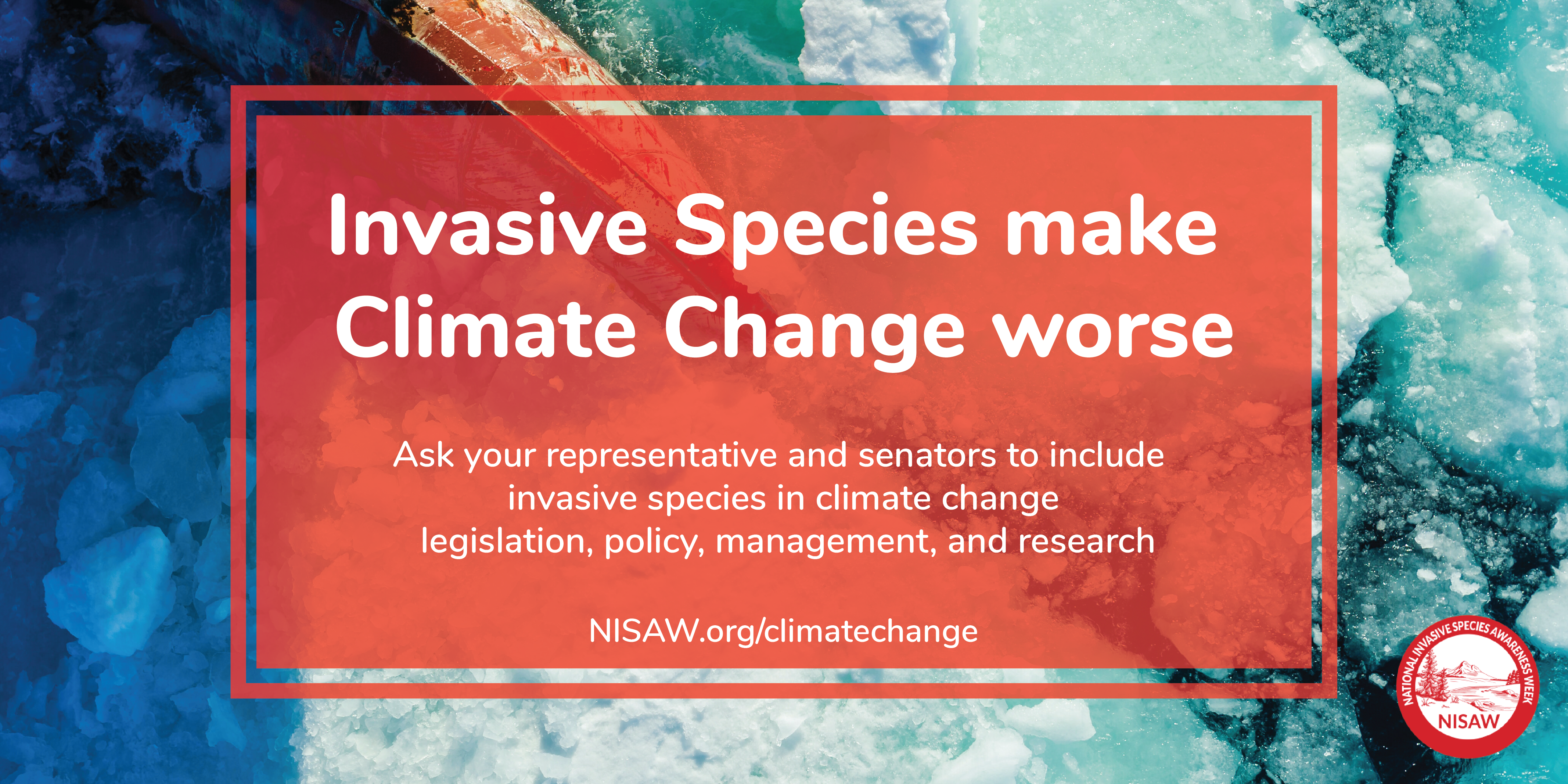 Ask your representative and senators to include invasive species in climate change legislation, policy, management, and research. Take Action → 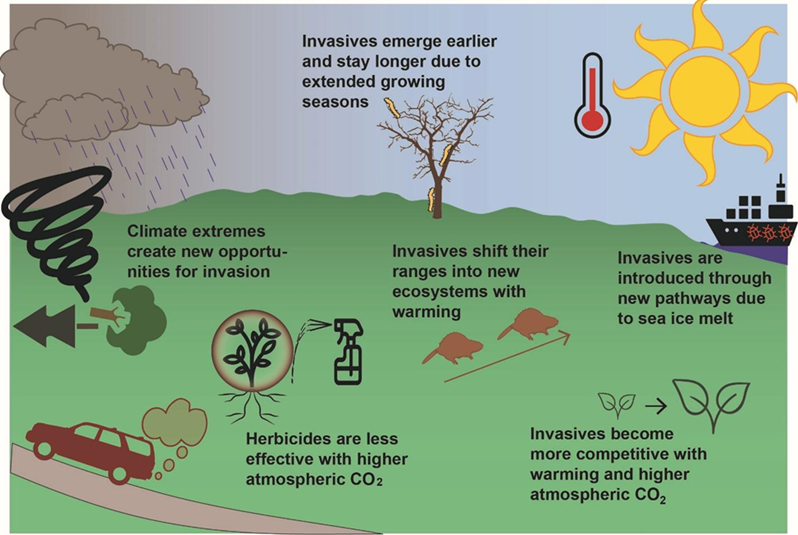 Climate change legislation, policy, planning, and management that includes invasive species will result in improved preparedness for a serious threat that we can take action to address.

NAISMA advocates for legislation, policy, management, and funding priorities that addresses climate change and invasive species collectively. Specific areas of emphasis include, but are not limited to:

There are a number of indicators that have been used to measure the changing climate, such as rising CO2 levels, altered growing seasons, increase in average temperatures, increases and decreases in rainfall, decreases in snowpack, reduction of arctic ice, increased drought conditions, rising sea level, and an increase in extreme weather events (e.g., wildfires, droughts, floods, hurricanes).

Overall, North America is  experiencing more extreme weather due to climate change and with the shifting systems listed above, these changes provide ever-increasing opportunities for invasion and spread, making ecosystems more hospitable to both new and established invasive species.

Under higher CO2 levels, plants often grow faster and larger. Research has shown that under the same conditions, invasive plants  are able to more effectively utilize the increased CO2 when compared to native plants, and are therefore able to outcompete native species.

New pathways for invasives to hitchhike into the Arctic

The melting of the Arctic sea ice opens new direct routes for both aquatic and terrestrial invasive species to become introduced- from both commercial shipping and new tourism pressures.

Warm weather arriving sooner each spring is a direct effect of climate change. Research is showing that invasive species take advantage of the earlier spring warmup by sprouting and leafing out long before the native species do. This gives them an edge in which they can monopolize the soil space, nutrients, and sunlight to outcompete native species and create monocultures.

This is occurring in both terrestrial and aquatic environments. Eurasian watermilfoil (Myriophyllum spicatum) , Curly pondweed (Potamogeton crispus L.), and Leafy spurge (Euphorbia esula L.) are examples of plants that can sprout before native species. They can take advantage of warmer water or soil temperatures, and longer growing seasons, which allows them to further displace native species.

As the climate is warming and historic temperature-based limits on species habitats are opening up, species are shifting their ranges. Species are moving further north into spaces where they were not able to survive before. Terrestrial plants and forest pest species are both making the move north. Research indicates that the Northeastern US and the Midwest are going to be hot spots for new species to establish. Pests are no longer limited by historically stable and cold winter temperatures and can survive in previously uninhabitable locations.

Asian clams and water hyacinth are aquatic invasive species that are considered intolerant to cold temperatures, however their current range extends much farther north than was previously thought possible.

Carbon storage and sequestration opportunities are being lost to invasive species

Not only is climate change exacerbating the spread and impact of invasive species, invasive species are directly contributing to climate change. We are losing millions of trees to invasive pests, which directly reduces the ability of our forests to store carbon. In landscapes consistently damaged or stressed by invasives, even if the trees can survive, ecosystem health is reduced and carbon sequestration decreases.

Increased new establishment due to disturbance from extreme events

The same is often true following severe western wildfires. In western shrublands, the presence of invasive cheatgrass increases the frequency of wildfires. The increased frequency of these fires allows cheatgrass to dominate, and the native shrubs do not recover to their pre-fire status. This is a big concern in the west for many animal species, like sage grouse which depend on shrubland environments. If careful restoration is not undertaken, invasive species can come to dominate burned areas.

Some non-native species are present but are not considered invasive because they do not cause significant harm. Often, this is because their population growth is limited by some naturally occuring balance within their introduced range. These “sleeping” species may take advantage of an opportunity due to the warming climate to “wake up” and become invasive. Often climate-based conditions were the limiting factor and if the climate shifts to become more suitable, the species will proliferate.

Facilitating the spread of both wildlife and human diseases

Non-native viruses, bacteria, fungi, and other pathogens that harm wildlife and people may also be considered invasive species. One example is the loss of bats from the invasive fungus causing white nose syndrome, which is a deadly infection exacerbated by sudden changes in cave temperatures, and is made more severe through the effects of climate change.

Neonative nuisance species are native species that have established themselves beyond their historical range and begun to damage or disturb their newly entered ecosystem. Black locust is a native tree in parts of central and eastern North America, but it has been expanding this range northward. In some of its newly established ranges, such as Wisconsin and Massachusetts, it now fits the profile of a neonative nuisance species and has been declared an invasive species. This tree illustrates how a species native to one part of the continent may become a serious problem elsewhere.

Climate change can also result in the reduced efficacy of control methods for the management of invasive species. Herbicides and pesticides are less effective for some species because of genetic resistance, but also because some invasive plants will absorb less of an applied treatment if they are drought-stressed.

Potential reduced effectiveness of biocontrols if phenology is mismatched.

Biocontrol agents are very specifically matched to their invasive species targets. Researchers suspect that biological control agents for invasive species may become less effective due to climate change, as there are several mechanisms by which this could occur. Climate change induced changes in ranges, growth, seasonality, and reproductive rates of either the biocontrol agent or target may cause ecological misalignments and decoupling the biological control organism from its target.

Source: NISAW 2021 webinar on Climate Change and The RISCC Network